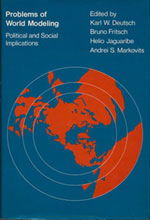 Earlier world models sponsored by the Club of Rome have stressed the interplay of population growth and industrial development with the threatening exhaustion of resources for food and raw materials, and with increasing pollution for the environment. They have largely omitted, however, the effects of political and economic decisions. These decisions and their social ramifications will have to stand at the center of the next generation of world modeling activities.

The papers in this volume were presented at a conference of specialists held in 1976 at Harvard University under the auspices of the International Social Science Council, the International Political Science Association and the World University of the World Academy of Art and Science. The seminar focused on substantive simulation models of major trends in world economics, world politics and world ecology. These papers deal critically with existing world models from various theoretical and empirical perspectives and suggest promising pathways for subsequent steps in world modeling.

Major features of the book include a detailed presentation of the recent normative model of the BARILOCHE group by Carlos Mallman; a summary of previous world models by Hayward R. Alker, Jr., and Ann Tickner; a social accounting scheme proposed by Richard Stone; various analyses of the role of the "Third World" by Helio Jaguaribe, Fernando Henrique Cardoso, Candido Mendes, Celso Lafer and Dieter Senghaas; a demographic analysis by Nathan Keyfitz; discussions and presentations regarding issues of social accounting and problems of modeling by Hayward R. Alker, Jr., Otto Eckstein, Bruno Fritsch, William Nordhaus and Anatol Rapoport; and discussions of possible data bases for modeling by Manfred Kochen, Richard Merritt, Bruce Russett and Charles Taylor.