The Politics of Scandal
Power and Process in Liberal Democracies 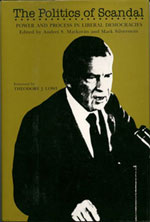 This collection of essays uses political scandals as an exciting and innovative means for the comparative study of liberal democracies. Combining the spice of scandal with a scholarly analysis of each political system, the volume examines the fundamental historical, cultural and structural factors that mark the politics of nine liberal democratic nations. As Theodore Lowi notes in his preface to the volume, the essays catch "each country in the act of being itself."

The theme that unites these essays is the continual tension between the demands of state power and the procedural limitations designed to control that power which characterize every liberal democracy. In times of normalcy, the conflict between public and private, power and process is often obscured. Under the stress of scandal, the inherent conflicts and contradictions within each political system become starkly evident. As these essays powerfully illustrate, penetrating beyond the sensational headlines and the titillating facts of a political scandal permits a sophisticated examination of the polity at large and the way liberal societies maintain themselves.

The nine case studies in this volume include the United States as well as European and non-European states, inviting the reader to find the common componenets of such seemingly disparate events as Richard Nixon's fall from power, the saga of murder and the mafia surrounding Italy's P-2 Masonic lodge, the sexual adventures of Britain's John Profumo, and the purchase of a Japanese prime minister by a multinational corporation. Each essay, authored by a specialist in the particular country, complest teh casual reader as well as the student of comparative politics to a deeper understanding of the complexities and contradictions of the liberal democratic state. The Politics of Scandal provides a fascinating reading for the student and specialist as well as the politically interested public.