Nationbuilding and the Politics of Nationalism
Essays on Austrian Galacia 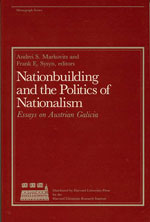 On April 28-30, 1977, the Ukrainian Research Institute and the Soviet and East European Language Center at Harvard University sponsored a conference on "Austria-Hungary, 1867-1918." Reflecting the interest of the Institute in furthering studies on the Ukrainians of the Habsburg Monarchy, the conference included a number of talks on Austrian Galacia. As a result of discussions with the participants, the organizers, Andrei S. Markovits and Frank E. Sysyn, conceived a plan to use the papers presented as the core of a volume on Austrian Galacia. In addition to the conference papers (Chapters 6, 7, 9, and 10) and additional unpublished contributions solicited (Chapters 8 and 11), the volume includes a number of fundamental articles already published (Chapters 2, 3, 4, 5). To place the problems discussed in the various papers in their imperial context, <%=Session("AndyName")%> has provided an introduction and bibliography (Chapter 1).

The volume presented to the reader is not a history of Galacia or of its Ukrainians. It does, however, represent a collection of works from differing perspectives by the major Western scholars who study the province. In practice, the essays have a natural thematic unity as they treat various aspects of national movements and nationbulding in Galacia. While the focus of the volume is on the Ukrainians, the contributions on the Poles and the Jews serve to emphasize the need for further studies on the interrelations of the three major peoples of the province.

Transliteration has been standardized according to the Library of Congress system for Cyrillic. For a multilingual region, geographic designations always pose difficulties. In Austrian Galacia, German, Polish, and Ukrainian were all official languages. The current border between Poland and the Ukraine has been accepted as the divide for Polish and Ukrainian place names. The standard English Cracow and Warsaw are used. A table of geographic names is intended to facilitate recognition by providing Ukrainian, Polish, German, and Yiddish versions of place names.

We wish to thank the editors of the Austrian History Yearbook, the Slavic Review, and Canadian Slavonic Papers for permitting republication of materials. It should be noted that Ivan L. Rudnytsky has provided a revised and updated version of his article. With our permission John-Paul Himka published his conference paper in Harvard Ukrainian Studies and Paul R. Magosci published his conference paper in the Ukrainian Heritage Notes of the Ukrainian Studies Fund.

We wish to express our thanks to Janet Vaillant, Associate Director of the Soviet and East European Language and Area Center Program, for her assitance in organizing the conference and the U.S. Office of Education for financial support. We are grateful to B'nai B'rith of Vienna for its partial subsidy for publication. Our gratitude is also extended to Ann Orlov for her careful editing and Brenda Sens for her meticulous typing of the manuscript. Finally, we wish to thank Omeljan Pritsak, Directory of the Ukrainian Research Institute, Harvard University, and Paul R. Magosci, Managing Editor of the Harvard Series in Ukrainian, for their encouragement of our project.