The German Predicament
Memory & Power in the New Europe 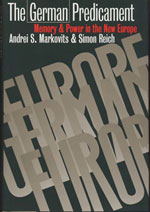 What does the unification of Germany really mean? In their stimulating exploration of that question, Andrei S. Markovits and Simon Reich sketch diametrically different interpretations that are frequently offered by commentators. One is that Germany, well aware of the Holocaust, has been "Europeanized" and is now prepared to serve as the capitalist and democratic locomotive that powers Europe. The other is that the proclivities behind Auschwitz have been suppressed rather than obliterated from the German psyche. Germany's liberal democracy was imposed by the allied victors, according to this view, and will one day dissolve, revealing the old expansionist tendencies to try to "Germanize" all of Europe.

Markovits and Reich argue that benign contemporary assessments of Germany's postwar democracy, combined with admiration for the country's economic achievements, contribute to a German influence far greater than military might was able to achieve. Yet, at the same time, some Germans have internalized liberal and pacifist principles and now see their nation as powerless, simply a larger Switzerland. As a result, while the Germans have enormous influence and latitutde, they have not taken responsibility for leadership. The prime reason for this gap between ideology and structure, Markovits and Reich suggest, lies in the politics of collective memory.

This book is also published in German and Dutch. 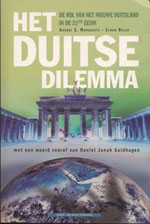 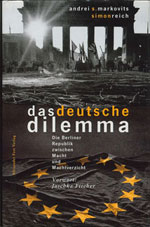