The German Left
Red, Green, and Beyond 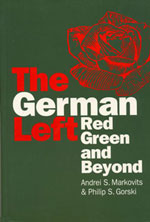 'Markovits and Gorski have written the definitive study of the German Greens and their catalytic role in comtemporary German politics. In the process, they reveal much about the distinctive features of post World War II Germany, and also provide a model to guide comparative studies of political movements.' -Frances Fox Piven, City University of New York

This book analyses the political development of the German Left since 1945.

In particular, it focuses on the emergence of the Greens as a party and movement, a process which fundamentally altered the nature of progressive politics in the Federal Republic. Indeed, one of the study's central theses concentrates on the Greens' transformative effects which - in the course of a decade - altered the structure and content of what it means to be 'left' in Germany.

Through detailed historical work and comparative political sociology, the book addresses isssues of the Left's alteration which have implications well beyond the immediate German context. Special consideration is given, in addition, to the East German Left as well as to the revolutionary nature of the changes of 1989-90 in the politics of Germany. The study concludes by reflecting on the future identity of the German - and European - Lefts.