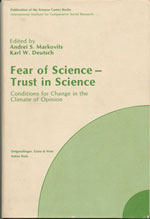 This volume was developed from a conference cosponsored by the Aspen Institute, the Science Center Berlin, and the Senate of the city of Berlin, in which more than thirty international scholars, researchers, and politicians discussed the relationships among science, scientists, technology, and the public in the past, during the present, and toward the future.

Historically, the public's acceptance or rejection of the cost vs. the benefits of science has assumed various forms of articulation and degrees of intensity. National differences involving social stratifications, political cultures, and historical experiences have contributed an array of variables that influence public attitudes toward science and technology. These attitudes, in turn, have affected the formulation and implementation of policies that determine the future development of science and technology as well as their social application. This book addresses all these complex issues in a historical and comparative context. Part I analyzes fear and trust in science in the past; Part II examines the present situation; and Part III raises important questions about future developments in this increasingly significant issue.